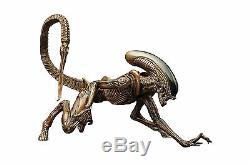 Following after the Warrior Drone from Aliens and "Big Chap" from the original Alien comes the fearsome creature that terrorized the inhabitants of Fiorina 161 in 1992's Alien 3, the DOG ALIEN! Spawned from a canine instead of the usual human being, this unique alien has a quadrupedal gait, spindly limbs, coloration, and other traits that differentiate it from the standard Xenomorph. The Dog Alien is a vicious hunter, and it's on the prowl in this all new ARTFX+ presentation sneaking into your display case.

Low to the ground, it stalks its prey with one arm raised and ready to strike and its mouth open in a silent scream. There's a massive amount of detail in its convoluted brown and black exoskeleton, and the smoky dome on the top of its head is partially translucent revealing the elongated skull beneath it. And as a special added bonus there is even limited poseability in the Dog Alien's tail!

Sculpted by Naoya Muto, the Alien 3 creature stands just under 6 inches tall (1/10th scale) in its four-legged pose, standing on a specially designed base. Add the incredible Dog Alien to your Xenomorph collection and display it along with other statues from Kotobukiya like the Warrior Drone and Big Chap! Fully painted and ready to display.

NEW in new original package, never opened or displayed. Approximate packaged weight 4 lb. For US, Canada, and U.